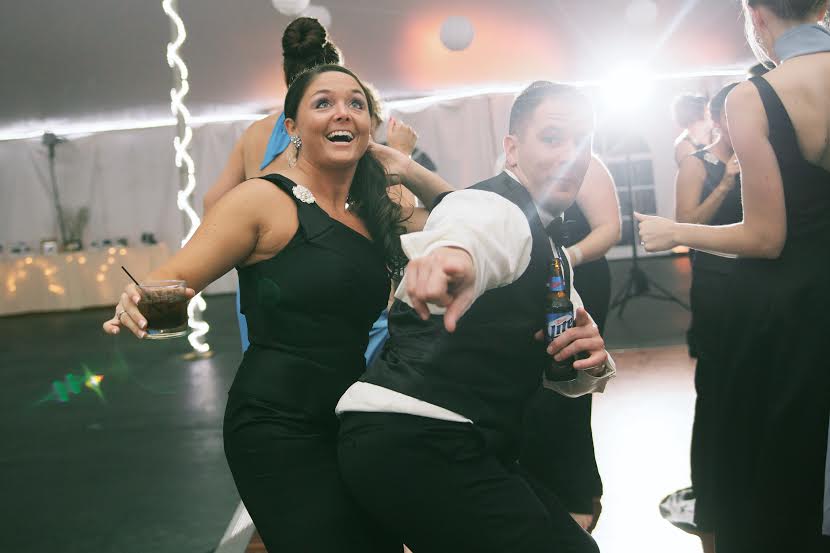 Since August is our busiest booking month of the year, I’ve been having  A LOT of conversations with potential clients.  These discussions can get pretty deep when talking about must play lists, getting people dancing, etc.  Here’s one I’ve been hit with quite often lately…

A Bride calls in to see if we might be the right service for her.   She then tells me that she recently saw a DJ (NOT OUR COMPANY) at a wedding that would play songs, and there was no rhyme or reason to it.  He would play a great song and pack the dance floor, and the next song would make guests leave it.  She wanted to make sure that didn’t happen to her.  Her solution:  Create a must play list to cover the dancing portion.  This will help protect her from a ‘bad dj’.

IMPORTANT TO NOTE:  She wants to choose ALL of her dancing songs, or nearly all of them.  I am not talking about normal-sized must play lists here.

Why this isn’t necessarily such a good idea:

I’m the first one to say that we’ll honor your must plays, as well as your do not plays.  And we really, truly will.  No matter what.  We are one of the few that say we’ll play it or avoid it, and do.

The problem with the scenario above is that the bride is most likely creating exactly what she wants to avoid.  Unless the DJ had a really tricky crowd or it really was a bad DJ (both do exist), there is a great chance that the DJ was working with a bride’s must play list.  If you give us a lengthy must play list… you are predicting what will work for your wedding.  Must play means we have to play it NO MATTER WHAT.  If it isn’t working, we’ve lost all control to do something about it.

Well, great wedding DJs know that if they play this song, these other songs go with it.  Unfortunately, those songs might not be on your must play list.  So now he has to search through it to find the next best thing, if it exists.  This makes it seem like there is no rhyme or reason to what a DJ plays.  You have taken away his ‘tools’, flexibility, and a lot of his best mixes.  His ability to bridge the gap between different genres.   With no prior experience DJ’ing weddings, and no ability to read your own crowd on the night of and respond to what they are saying, you’ve now attempted to DJ your own.

Imagine if we could walk into weddings every single weekend with only 50 dance songs that were sure to work (average based on a 6 hour wedding).  Well, first of all, there would be no difference between good DJs and bad.  And people wouldn’t aspire to become DJs, because it wouldn’t be challenging.  When in fact, it is one of the most challenging and exciting jobs you could have.  Part of the thrill of being a DJ, is knowing that you were directly responsible for giving people one of the best parties of their lives, and packing dance floors.

When you’re a wedding DJ, you have a different crowd every weekend.  You really do “read the crowd”.  And believe it or not, a good DJ doesn’t play the same stuff at every wedding.  Of course, a lot of the really sweet hits that are sure to make people dance are certainly played.   Because they work.

It’s the filler stuff that makes the difference.

The stuff that you play as a result of a really good conversation with the bride and groom, to understand what they want.

The stuff you play to support the things they want, because you know of some other things that mix well with it.

The stuff you play that you haven’t played in awhile, but your gut tells you it will work ‘if they just danced to that other song’.

The stuff you know to play because it gets the guests pumped for one of the must play songs.

The stuff you pull out of nowhere because you’re so damn good at your job and do it so often, you’ve got a bigger tool box than DJs that don’t.

And the stuff that has people saying, “WOW!  You are an amazing DJ.  You’re the best DJ I’ve ever seen at a wedding”!

A great wedding DJ will have such a thorough conversation with you to know what you want,…there’s no way they’ll hit on the songs you don’t want (for those that worry about the cheesy stuff).

The moral of the story:  Hire a DJ that has the right stuff, cares enough to find out what you like, has a proven and verifiable track record of getting people dancing AND provide him with the flexibility to read your crowd.   This will ensure that your wedding is what you’re afraid it won’t be.  And sometimes a crowd really is so tricky, that your DJ needs the extra stuff that you’ve taken away.

With all of this said, some brides and grooms care more about listening to their own soundtrack than getting people dancing.  If that’s the case, it’s an entirely different conversation.  We don’t insert our expectations into your night.  If you want to hear your stuff regardless of the results, we respect that.

Before I get the backlash of brides that say they picked all of their own music and it worked…I’ll admit, we’ve had some weddings where a bride and groom picked all of their own dance songs, it freaked us out, and it worked!   There’s a chance it may have sounded more fluid if we had access to songs we thought would mix better with some of the other song choices, but it worked!

Yet we have had more weddings where a bride and groom walked up to us and said, “just do whatever”, after the must play list was failing to achieve results.  Or, receptions that we just didn’t feel were as good as they could have been, had we had access to all of our tools and favorite mixes.  Unfortunately, by this time, we have to RESCUE the party, or never had the opportunity to.  As with anything else in life, it’s better to be proactive than reactive.  What you’re essentially doing is gambling with your dancing.  And with what we’ve seen after servicing thousands of weddings, the odds AREN’T necessarily in your favor. Recent Posts
Categories
All content ©2005-2022 A Bride's DJ. All rights reserved.
Back To Top